You see, when couples break up, there is always a good reason for this. Some of it is preventable and unfortunately, some of it just isn’t.

A lot of guys lose their girls because they just become stagnant, passive, and they bore their girls even though they don’t even realize it. A lack of emotion and interest within a girl is a very powerful force; if she just isn’t feeling it anymore, for whatever reason, then she’ll be gone… and you’ll have to hit the reset button again.

So yes, not only is the goal here to keep things interesting and fun, but you also have to keep the attraction alive. A lot of guys start falling into a deep hole after they get into the relationship. They lose what it means to be a man… and once this is gone, your female companion is psychologically hard-wired to lose attraction for you.

It isn’t her fault. And to an extent, it isn’t even your fault either. It’s just the cold, hard truth.

I know that making things always interesting trying to always be a high valued, attractive male is a difficult thing… I mean think about your life for a second. Is every single moment of your life interesting? Probably not, unless your name is Richard Branson. Every single person in the world has to have their “up” moments and their “down” moments.

So the only thing you can do in situations like this is to make this “down” time temporary, and once in awhile, inject a bit of fun in your lives.

If you feel like that you’re losing your girlfriend, or you want to know what you can do to spice things up when you do get your girlfriend back, then read on!

1.)  Don’t only do what both of you are interested in.

It’s likely that the reason you got together with your girlfiend was because you both like swimming, painting, singing, or whatever. And chances are, once you two got together, that’s all you two ever did. 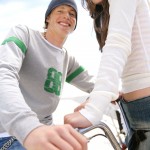 I’m not saying you should stop doing these things, but not when that’s the only thing you both do. Mix it up a little. Try different things. Sign up for a pottery class or drum lessons. Just try and find a little variation.

Or if spontaneity is the norm then don’t be spontaneous. Sometimes your girlfriend will find it hot when you just randomly clear up your work schedule for the day and then just go on a huge trip somewhere. Just be spur of the moment. Take a day road trip somewhere or go fly kites at the beach… but don’t plan this… just do it.

3.)  Set up a rotating date schedule.

Every week, have a date night. But make sure it isn’t “every Tuesday” or “every Wednesday”.  You’ll need to mix it up a bit and keep her on your toes. Routine is for work, but for date nights, you want it to be for fun… that means doing a date night when you two actually want to do a date night.

Make new friends. This is one of the easiest ways to spice things up. Do you have any other friends that are in couples? This is a great opportunity to make new friends and do some group activities together. Women love to socialize with other women that they like, so use this to your advantage and make her happy!

5.)  Start spicing things up in the bedroom!

6.)  Surprise each other with gifts. 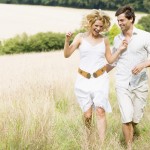 This tip can easily backfire on you. A lot of men start showering their girlfriends with gifts as soon as he realizes that she’s totally drifting away. Don’t do this. However, if things are going well, the occasional gift is actually a good thing, but make sure it’s because she’s earned it somehow, some way. And don’t give her too many gifts.

7.)  Make her revive an old passion of hers.

Did she used to love painting or dancing but she doesn’t do it anymore? Surprise her and get her a new painting set or some dance DVD’s. Once she falls in love with her passion again (and she will), she’ll thank you for it. This will earn you major points with her.

I can’t guarantee you that these 7 things will definitely work to revive a dying relationship. Sometimes it’s just best to let things die if they just take way too much effort… then rebuild everything from scratch.

However, I can guarantee you that if you apply these 7 things, you and your girlfriend will have a relatively better and happier relationship than you did before.

So far, I’ve discussed things you can do to prevent breakup in general, but I didn’t really go over the things that you can do to keep your girlfriend sexually attracted to you.

This isn’t a good sign. If your girlfriend is able to boss you around and pretty make you her bitch, then you can bet that her attraction for you will decrease dramatically.

Men lead. Men get what they want. Men are ambitious. Men are independent and strong-willed.

Once you start letting go of these traits, your girlfriend will lose attraction for you.

Let’s go over some of the mistakes that many men commit when they’re in a long-term relationship that just kill attraction.

By saying ‘yes’ all the time, you’re pretty much telling your girlfriend that you’ll do anything she asks you to. You effectively becoming her whipping-boy.

Don’t be afraid to say, ‘no’ once in awhile. Be a man a stand up for yourself. Yes, relationships are all about compromise, but sometimes, put your foot down and do what you want to do.

Mistake #2 – They’ll start seeing her way too much.

Men in long term relationships will sometimes start to act like huge pussies and will want to see their girlfriends as much as possible. Let me ask you… is this a particularly manly thing to do? No. Men are independent, remember? Don’t be afraid to tell your girlfriend that you’re busy and that you have the night off with friends.

Mistake #3 – Saying ‘sorry’ or apologizing too much.

By saying that you’re sorry all the time, you’re pretty much saying to your girlfriend, “I’m always wrong. You’re always right. Please, lead me because I am so pathetic that I can’t do anything myself!” Okay, maybe that’s pushing it a little far, but you get the picture.

Quit apologizing for everything. Quit being such a ‘nice guy’ and start being that alpha male that she truly desires!

Mistake #4 – Quit asking her what she wants to do.

Men that are attractive and independent do what they want, when they want, and how they want. Yes, sometimes it’s good to let your girlfriend decide what you’re going to do that night, but only make this a “once in awhile” type of thing. Women are naturally attracted to men that lead, and if you aren’t leading, then you’re a follower.

Mistake #5 – Not flirting with other girls.

It’s important to keep your ex a little jealous. Don’t cheat or do anything like that, but don’t be afraid to chat up that hot waitress at the restaurant a little bit. Hang out with one of your attractive chick friends and let your girlfriend know about it.

Let your girlfriend know that you’re attractive because she will in turn find you attractive.

Mistake #6 – Asking her what she thinks of you.

These are questions that only women should ask their boyfriends or husbands, not the other way around. By asking these questions, you’re pretty much saying that you’re insecure. Insecurity is an attraction destroyer.

Well, I hope this article helped you identify some problems that you can resolve with your current girlfriend (or future girlfriend!)!

You may also find some helpful hints in this video from Corey Warren of UnderstandingRelationships.com…